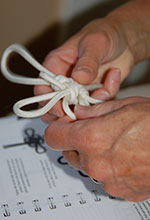 In 1999, I decided to be more than an audience of the arts. I enjoy various forms of graphic arts, book making, and paper making. Little of this has any commercial potential, though that is not usually the point of it. Since I do it to please myself and friends or to help out various not-for-profit organizations, there is little benefit of posting it to the world. Also, once something is on the Internet, it is virtually free.

I did a fair amount of web site design, implementation and maintenance. It, however, was really a bit to close to programming to be a creative release. Thus, that is not going to be touted here.

At some point I will put up some recent endeavors, but for now, here are some simple slide shows for your general amusement.

First is a series of Jack O'Lanterns that my husband has carved.

Next are images and text for a handmade book called "Mr. Potato Head Revisited." Photos of the potato heads and their ilk were taken as they were created. I created a 1950s style Formica pattern for a background using Adobe Illustrator. The background was added behind the photos via Photoshop using a mask to keep the shadows. The book itself is much cuter and comes with its own customized box.

Below is a 2020 project called "Pandemic Poem Book" which is contained in a dioramic case. The video describes the process of make the project as well as the final images of the book and case.

Finally, is the series of Holiday cards that my husband and I send out. The cards are a combination of staged camera shots, and image collage, and pure Photoshop fantasy.